American photographer Gregory Crewdson is best known for his elaborately staged and lit photographs. Referencing cinema, the vignettes seems as if there were taken right out of a film, depicting twilight moments that often feel supernatural. His work has been exhibited internationally, including solo exhibitions at MOMA and The Guggenheim. [Bonus: His Sanctuary project is currently on display at the CONTACT gallery in Toronto as part of the TIFF Future Projects program.] 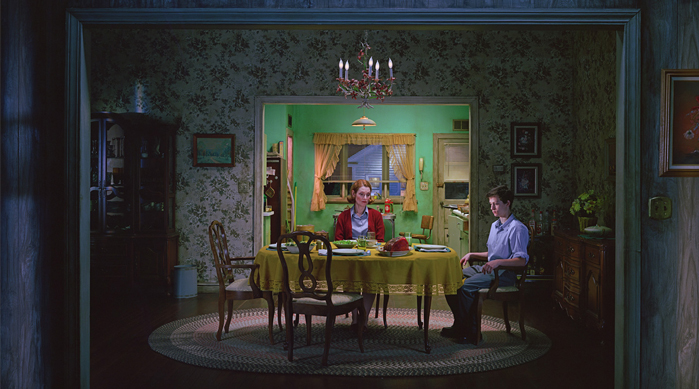 The Big Deal:
Crewdson’s work has been a source for debate over how involved one needs to be in a project to call the work one’s own. Some people object to his use of large crews, (including a director of photography, production designer, and digital stitching team), and the fact that an assistant is usually responsible for releasing the camera’s shutter, suggesting the resulting image is a group effort rather than the work of an individual photographer. He is an excellent example of someone whose projects grew in scale according to his experience – beginning with small table-top vignettes, then full rooms, then houses, then whole neighbourhoods.

Life in Brief:
Born in Brooklyn in 1962. Father was Freudian psychoanalyst who conducted his practice at home; Gregory hears conversations through the floor. Studies photography at SNYU Purchase in New York. Goes on to receive Master of Fine Arts degree from Yale. Joins Yale faculty in 1993. Is represented by White Cube Gallery in London; continues to produce and exhibit work.

Quote:
“I like to put all I can into a making a single image as beautiful and complex as possible, and I am interested in how that image remains impregnated with meaning.”

Trivia:
As a teenager, Crewdson was a member of the band “The Speedies.” In 2005 their song ‘Let Me Take Your Photo” appeared in a Hewlett Packard commercial for digital cameras.

View all posts by Knock Twice